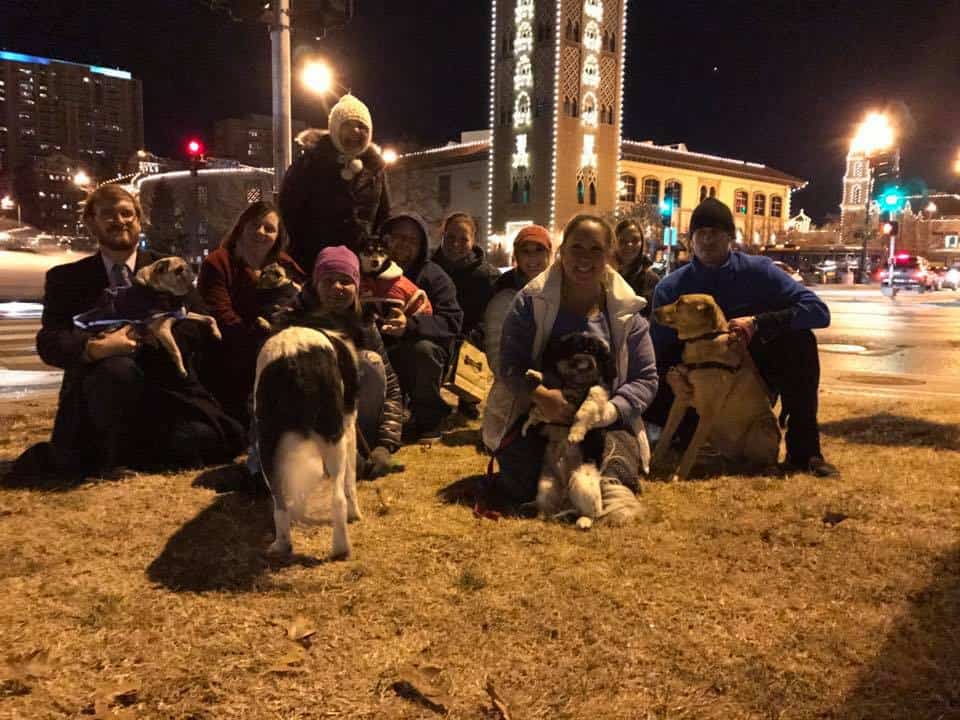 The Kansas City Dog Club awards is our club’s way of recognizing and saying thank you to all the dog parks, hiking trails, dog-related organizations, and businesses that help make the Kansas City metro area great for dogs and their human friends.

This is the 2nd year Kansas City Dog Club has hosted an awards bunch to honor Kansas City’s best in doggie-fun for the previous calendar year.

And the 2016 Kansas City Dog Club Award winners are…

Best Walk with the Pooches Nominees

We could also call this section of nominees: The best places in Kansas City to walk your dog!

Antioch Park was the winner of the 2015 Kansas City Dog Club Award for best dog-walk location. This is a great walk with lots of variety along the walk – bridges, spaced stone steps across the water, rose garden, and lots of ducks. Dogs and humans alike love this walk!

Both dogs and humans love Loose Park‘s rose garden and pond. A great walking route around the park, with lots of people eager to pet our pups.

Our walks at Minor Park allowed us to add some variety to our usually paved mid-weeknight walks. The trails at Minor Park gave us options to take a short stroll through the woods and/or walk across the dam at Alex George Lake.

What’s not to love about walking your dog through fields of art?! There’s always a lot going on at Nelson-Atkins, especially during the Pokémon GO craze of 2016!

The Plaza has become KC Dog Club’s winter home for dog walks the past two years. Country Club Plaza is well-lit and there are always lots of people excited to see our weekly “dog parade” November through mid-March – hurry up daylight savings time! Our regular stop at Three Dog Bakery really help push The Plaza over the top to win 2016’s honor!

Best Hike with the Hounds Nominees

If you’re looking for the best places to hike in Kansas City with your dog, this is the right list for you!

Did you know Swope Park is one of the largest urban parks in the United States? There are lots of great hiking trails at Swope Park, and KC Dog Club members especially like our hikes that combine the WudChuk Run and Rancho D-Lux portions of the trail system. We love all the huge rocks!

Shawnee Mission Park has miles upon mile of trails, but KC Dog Club members really like the Orange and Violet Loops of the the trail system. Meeting at Shelter #3, the combination of these two loops give multiple opportunities for hikers to cut their expedition short. As well, the Orange Loops begins next to the paved trails – in case the hiking trails are closed due to muddy conditions, the paved trails are a great subsititue.

Cave Spring Trail is a great trail with many cut-through options. This is the perfect trail for the beginning hiker, the trail can be completed in 45 minutes – but Kansas City Dog Club members recommend heading back in and taking all the little cut-through trails for a “choose your own adventure” experience.

→ Give your dog the gift of a social life

This 3 mile loop is a great hike with varied elevations, but not too difficult for the casual hiker. The  Wagon Loop on the Blue River Parkway Trails is the defending 2015 KC Dog Club Award winner for best hike, it’s not surprising to see a 2016 nomination for this great 3 mile hike in south Kansas City, MO, although losing out this year to a sister trail. 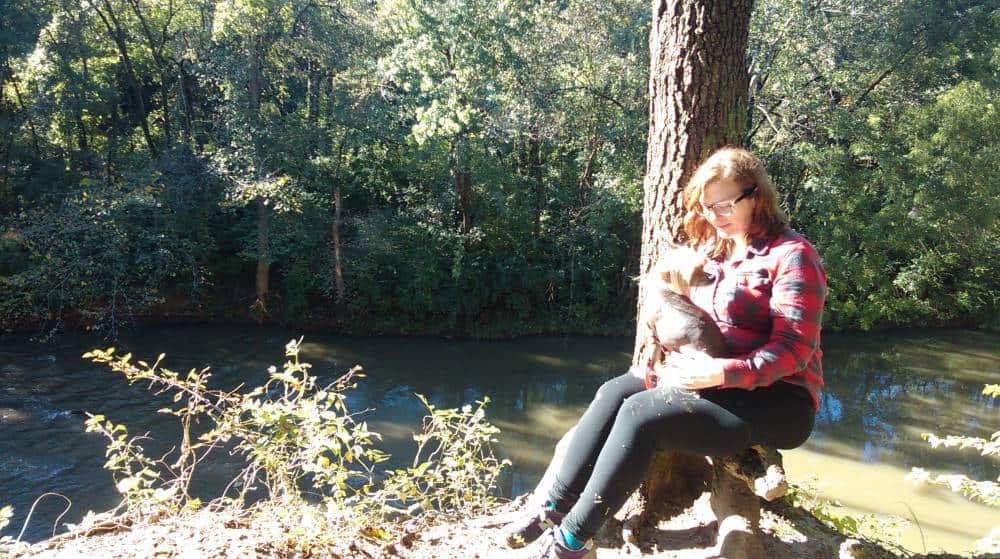 Lauren Caldwell and Bowie, high above the Blue River on the Old Railroad Bed Trail

The Old Railroad Bed Trail is exactly what it sounds like – a trail in south Kansas City, MO where the old railroad used to be. Also part of the Blue River Parkway Trails, the near 4 mile Old Railroad Bed Trail hike captured the affection of KC Dog Club members with it’s vast variety of terrain, crossing the water where the old train bridge used to be, overlooking the “new” railroad, and beautiful views overlooking the Blue River from high above.

Best Dining with the Dogs Nominees

Do you love to take your dog with you to happy hour? This it the right list for you – Kansas City’s best patios to drink with your dog!

Spin! Pizza is known for their dog-friendliness, regularly hosting CIAO BOW WOW events offering a meal for humans and a meal for fido, all benefiting local dog-rescues. In the KC Dog Club, we love the patio in Lee’s Summit, which has green space (grass) open to the patio. Spin! Pizza has the best sangria in Kansas City – and there’s no place better for a glass or carafe of sangria with your dog than Spin! Pizza in Lee’s Summit

Right on the Trolley Track Trail in Waldo, KC Bier Co. is the perfect place to begin and end summer walks with the club. Great cold beer and awesome snacks on the picnic table filled outdoor area is the perfect way to finish off a dog walk on a hot summer night

Apparently KC Dog Club members love beer, because they nominated multiple breweries for the 2016 Dining with the Dogs award. Martin City Brewing Co. is the perfect spot to stop after our great South KC hikes. Great brews and great bites – and the staff is always happy to see us!

The folks at Martin City Brewing Co. may have split their votes – having two great locations in South KC can’t be bad, though! Martin City Pizza & Taproom is another great stop after our South KC hikes. The Club had an especially great time cheering on the Chiefs from the patio – as the hounds barked and cheered with each Chiefs score. 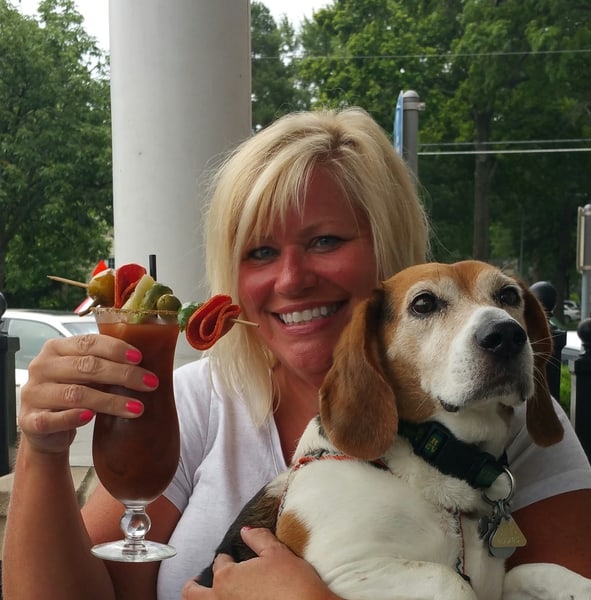 Beth Schmitt and Diamond Joe, enjoying a Bloody Mary with brunch on the patio at Blue Moose Bar & Grill

Defending their 2015 KC Dog Club Award for Best Dining with the Dogs, Blue Moose Bar and Grill in Prairie Village is the 2016 award winner, as well. Blue Moose’s brunch buffet combined with the availability of the full menu, the awesomely comfortable patio, and super dog-friendly staff really pushed Blue Moose over the top with club members.

This is THE list of the best dog parks in Kansas City!

Swope Dog Park is one of Kansas City’s newer dog parks, opening in 2012. The park had some serious issues with a “muddy bog” shortly after opening, but recent renovations have truly helped this dog park win over KC Dog Club members. Swope Dog Park is a modest sized-park with plenty of spots for humans to sit, a large field, a nice perimeter trail and lots of shaded area. The Club spends our time in the large dog area of the park, but Swope Dog Park also offers a separate area for smaller dogs.

Leawoof Dog Park is a nice dog park tucked away at the back of Leawood City Park. Another newer dog park, Leawoof features a large dog park and a small dog park, with plenty of shade and agility equipment for the pooches. A nice bonus with Leawoof Dog Park – if the park happens to be closed due to too much rain, the park sits on the Indian Creek Trail, paved and ready for a nice dog walk.

The Bark Park at Wayside Waifs is the only private dog park to receive a nomination in 2016. Bark Park offers areas for large dogs and small dogs. Daily, monthly and yearly memberships are offered for park members. The park recently opened their new Comfort Station, including indoor restrooms, vending machines, a separate picnic area, and a dog-wash and drying station. 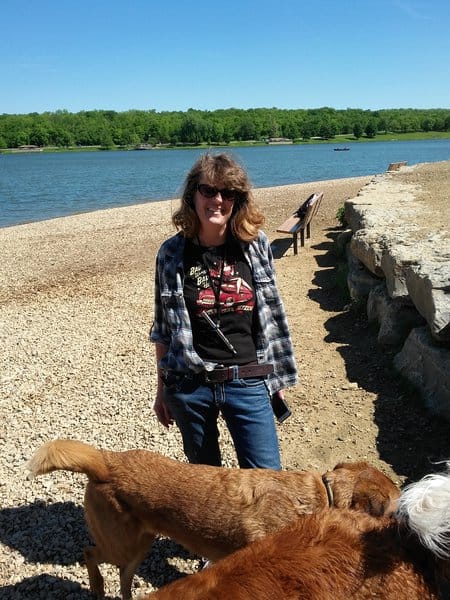 Nominees in this category are Kansas City’s best dog events that aren’t purely charity events. However, many of these events did give proceeds to a local dog-centric non-profit organization.

Barktoberfest, presented by 99.7 The Point, is dubbed as Kansas City’s ONLY pet and music festival. Barktoberfest had lots of vendors and live music all day. The 2016 benefactor was Wayside Waifs. Barktoberfest was the winner of 2015’s Best Dog Festival award.

→ Become a member of the club 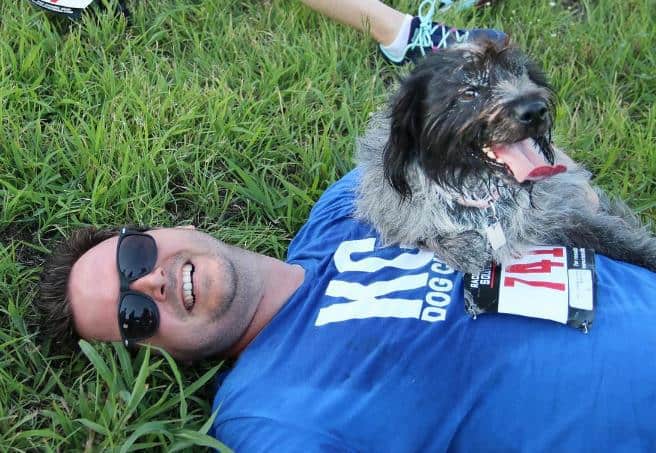 When you’re building a dog park slash coffee shop slash restaurant slash bar – you better know how to throw a party! AND Bar K does! The Bar K Pup-Up Party and 5K event to fund the new private river front dog park at Berkley Riverfront Park was a smash hit with KC Dog Club members and the public, alike! Coupled with a 5k before the beer drinking, the Pup-Up Party had a staffed and fenced dog park, tons of dog-related, and alcohol-related vendors.

Strutt With Your Mutt is one of Wayside Waifs’ big yearly fund-raising events. KC Dog Club brought out a big group for Strutt. Club members both ran the 5K and walked the 3K, and visited the wide variety of vendors in attendance.

2016 was the first year for the Dirty Dog Mud Run. This was a great 5K with a pair of mud pits… some our club’s humans didn’t like the mud… even more dogs didn’t. There were lots of great dog-related vendors at the Mud Run in 2016, and KC Dog Club members are looking forward to the 2017 Mud Run. 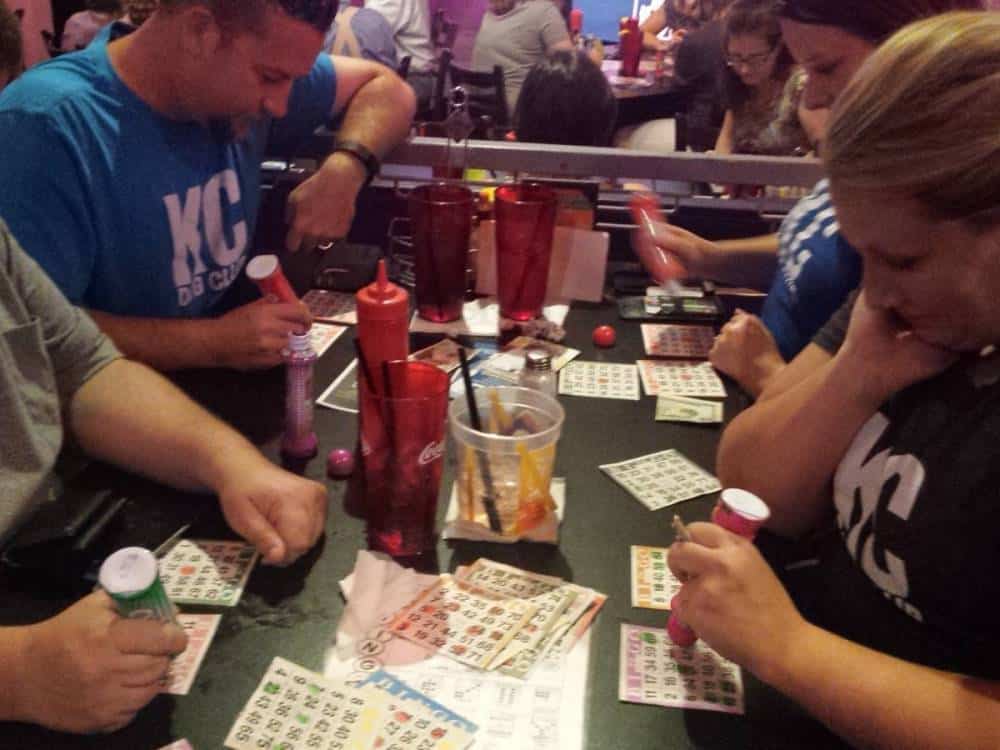 Rob, Kurtis, Jenny and Sarah concentrating, trying to a “hard-on.”

Events nominated in this category were great KC Dog Club events that didn’t specifically fall into any of the other categories.

This dark comedy was a good laugh for most KC Dog Club members, and a jaw-dropper for others. Weiner Dog captured our hearts, before ripping it out.

Club members eagerly awaited The Secret Lives of Pets for nearly a year. Many (at the time) new members attended this social outing as their first event with the club. It was a great flick, followed by great food, drink, and conversation on a great night on the rooftop patio of O’Dowd’s. 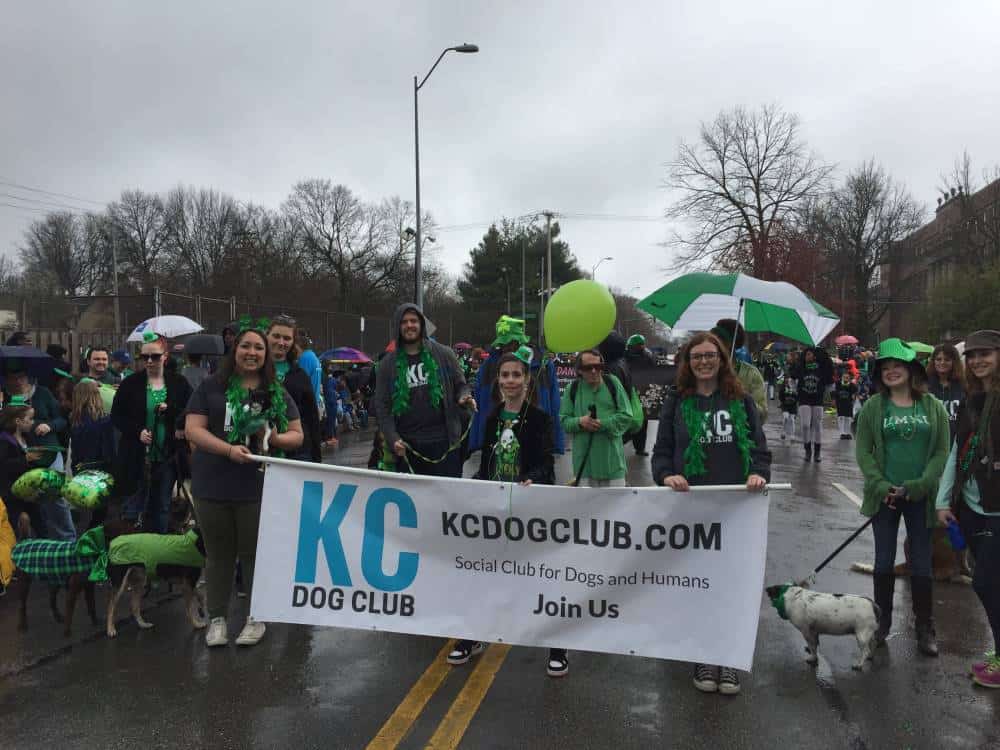 Brookside’s St. Patrick’s Warm-up Parade was the first time KC Dog Club came together to spread our love for our club to the Kansas City community. Cold and wet weather didn’t keep us away – as walking in the parade was one of the most well-attended KC Dog Club events of 2016. The Club’s participation in the Brookside St. Pat’s parade was the run-away winner in this category, receiving an astounding 74% of the vote!

“Can I Pet Your Dog?” Award 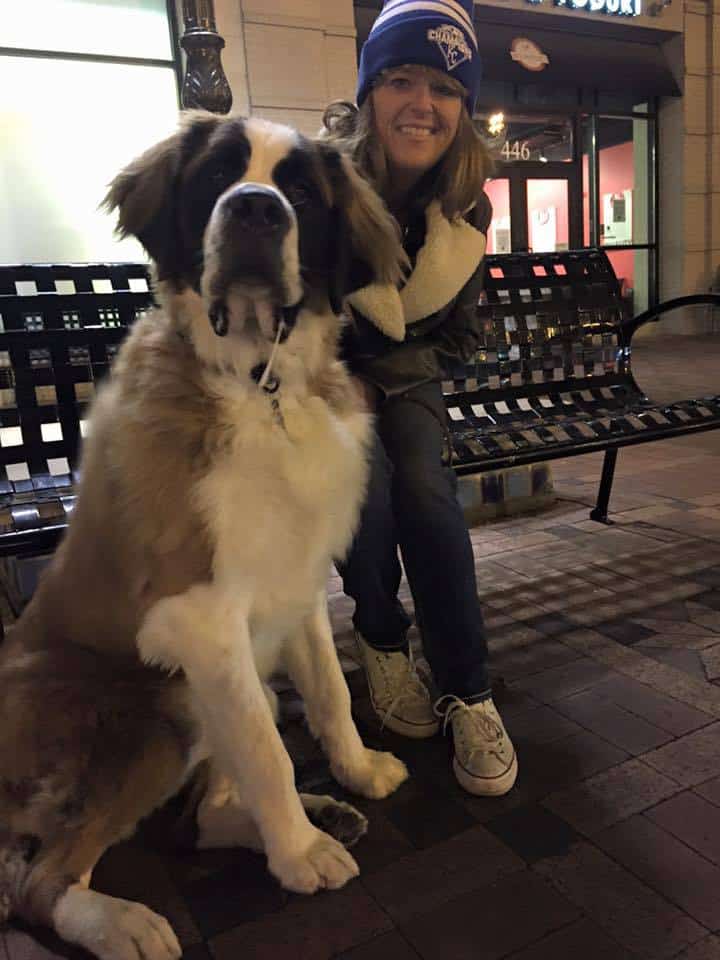 Every where Kansas City Dog Club went all year long – everybody we passed asked to pet Little Joe, the Saint Bernard.

→ Join in on the fun 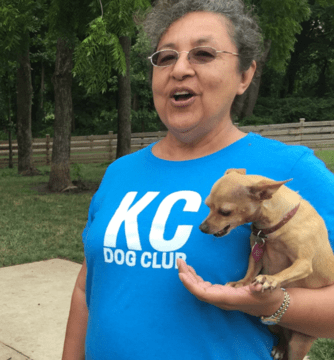 This award gets its name from the 1963 Disney film. Pauline lives in Ojai, CA and attended 12 club events in 2016! 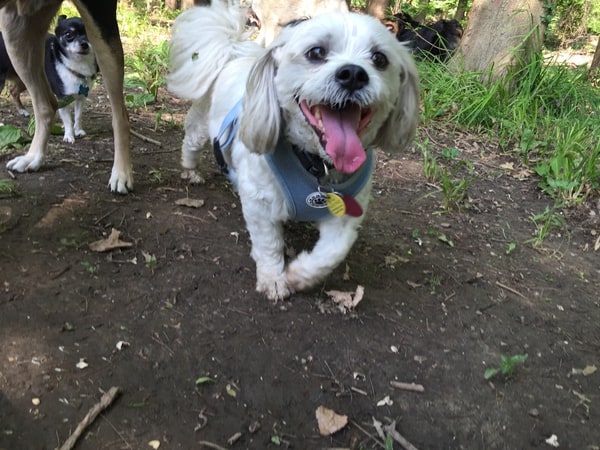 Every day is Hump Day for Shaggy. Big or small, Shaggy loves ’em all! 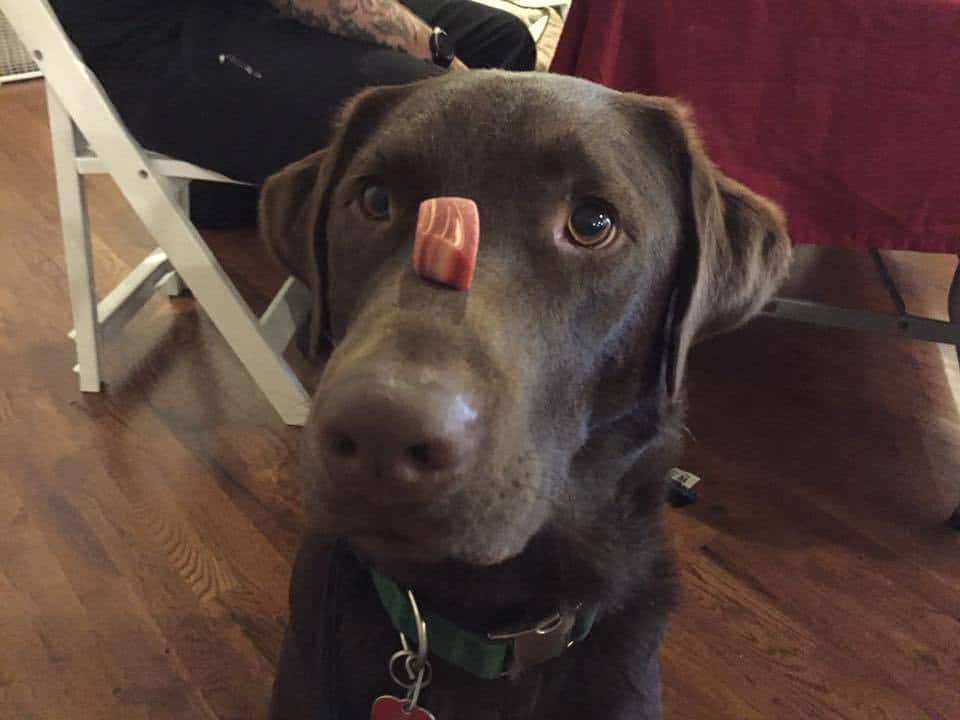 Douglas doing tricks! “Not Yours!”

No one really knows how many tricks Douglas knows. He seems to have a new trick at every KC Dog event.

“Coming Out of Your Shell” Award 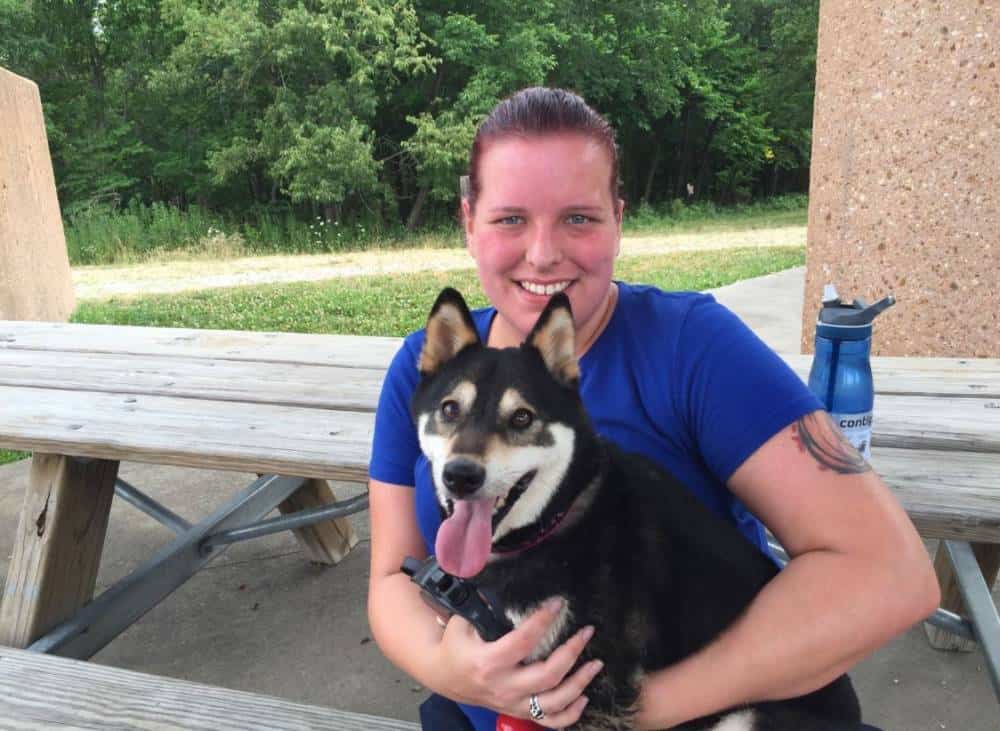 Like dog, like owner – Jenny and Shiva have both really come out of their shell since joining KC Dog Club. Now they both let strangers pet them! HA!

Christine, Panda and Chico at Three Dog Bakery on the Country Club Plaza

There are no beavers in the Dog Club, but there are Retrievers. Christine is always happy to step up to help host KC Dog Club events, take photos of members and help manage KC Dog Club’s social media accounts!

What are your favorite dog-loving Kansas City places?

Let us know in the comments below!